Bay restaurant and its revolutionary menu

How it all started..

Sister’s Niamh and Sinead Costello are both Clontarf natives.

They were lucky enough to have been born and reared in Clontarf’s leafy suburbs and 12 years ago, they opened Bay Restaurant. Niamh and Sinead have always been fans of a healthy lifestyle and lead an active and sporty lifestyle themselves. After several years in business, they decided to take it one step further by investigating the nutritional side to their business and the many benefits it could give to their customers. The first step was Sinead studying hard and completing a nutrition course in 2009 with the IINH (Irish institute for nutrition and health). Following on from this, Sinead and Niamh decided to bring this healthy ethos to Bay Restaurant and joined forces with their kitchen team, lead by head chef Foued. Although this was a new undertaking for all concerned, Niamh and Sinead found it wasn’t hard to persuade Foued to try to change. Foued himself is a family man who takes regular trips to the gym and this new healthy initiative quite quickly turned it into a passion rather than a task. The team began to use as many healthy ingredients as possible when creating their dishes, replacing and reducing the unhealthy one’s where possible without compromising the taste. ”We have a lot of regular customers and we kept hearing customers uncomfortably asking questions such as: Is this dish coeliac free? Are you sure this dish is for vegans? or Sorry I can’t eat high in sugar or salty food, can you ask the Chef what’s in this dish?” says Sinead. Not just from the service point of view, but most importantly, for the customer’s comfort, Niamh and Sinead decided to work on giving customers the answer’s before they had to ask. ‘’All this information is now right there in front of them on our menu” says Sinead. A few months after Sinead completed her nutrition course, Niamh and Sinead took the healthy concept another step further and met with Harriette Lynch from Health Pro, a nutritional specialist who partnered with them and worked hard with the team and Head chef Foued. They had to break down each dish on their menu by painstakingly contacting all suppliers to achieve all the nutritional values. They also attached allergen symbols to each dish which resulted in a revolutionary menu. All this work paid off and Bay Restaurant became the first restaurant in Ireland with nutritional information on their menu. ‘’Not only did this make our customers no longer feel uncomfortable asking about each dish, our much talked about calorie count, while initially put in for information purposes only, gained us much notoriety and popularity!” says Niamh So much so that Bay Restaurant was invited onto national television two years in a row to talk about leading the way as the first restaurant in Ireland to have such a detailed and analyzed menu. They appeared on RTE’S Operation Transformation, TV 3’S Morning Ireland AM and Prime Time with Pat Kenny as the nation debated on the questions- did we need to see calories? At first, some people did not know what to do with this knowledge. People were saying they didn’t need to know how many calories they were having when eating out as it was a treat. However, on reflection, the majority realized this is something incredibly beneficial, for themselves, their kids, families and friends. Today, there isn’t a day that goes by where the team don’t hear positive comments about how much their customers love their new menu. Giving options and making food as healthy as possible, without compromising on taste and making all customers feel comfortable, while still giving choice like they have at home was always the goal at Bay Restaurant. Today Foued’s knowledge of food compliments his culinary passion and had the skills to create their new menu which caters for all types of diets including people with food allergies or simply for people who like to know what they are eating. Bay Restaurant in Clontarf use only the freshest ingredients which are delivered daily. Enjoy feeling great.

Happy, healthy and tasty 2015 on behalf of the whole team at Bay Restaurant

Published on 8 December 2014 | Back to December Articles 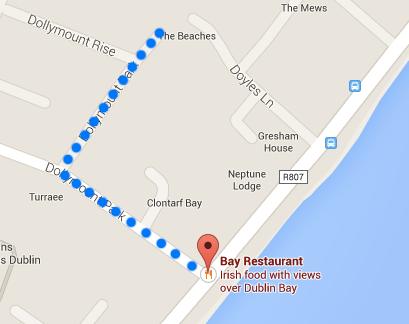 Thanks for signing up!
Reserve Now